‘Ramadan Kareem everyone!’ shouts David, a resident from Startblok Elzenhagen. Yesterday an iftar was organized at the Startblok, or as it says on the flyer: A Startblok iftar. The iftar is the first meal that muslims are allowed to have after a day of fasting.

Residents are entering and the long table in the Noordpool, the common room of Startblok Elzenhagen, is filled with dishes, bowls and pans. Before we start the dinner, Ali shares a story about Ramadan. What is Ramadan and why is it so special for a lot of muslims? ‘Fasting is not just about not eating and drinking, but about so much more. You refrain from gossiping and listening to evil talks and you develop selfdiscipline. It is a special month for devotion, changing bad habits and unity. Last night the residents from Startblok Elzenhagen celebrated the feast of this meeting together.

Ramadan in the Netherlands

Ever since the start of the Ramadan, Ali organizes an iftar in the shared living room of his hallway every evening. He does this together with a few of his hallmates and other residents of Startblok. They take turns in cooking lovely Syrian meals. This evening the iftar takes place in the Noordpool and Ali brought hummus: selfmade hummus, that he decorates on the spot with paprika powder, cumin and lots of olive oil. ‘It is different though, Ramadan here in the Netherlands. For example, there is no ‘azan’ that echoes out of the minarets of the mosques. ‘Azan’ is the call for prayer and during Ramadan it is also the call that allows to eat. In Syria a lot of rooftops and windows are decorated with lights, everyone goes out on the streets after dinner and every night there is an iftar with another relative. I miss the ‘azan’ and I miss this nice chaos.’

Around a quarter to ten soms residents are looking at each other: ‘Can we start?’ asks Vera. Mohamed looks at his watch. ‘Two more minutes.’ Yesterday the sun set at exactly 21:49h. The moment is there. Most of the residents who fasted all day first quietly drink a glass of water. Enes asks where the dates are. Unfortunately no one tought of this. A date is according to the tradition the first thing that is eaten after a day of fasting. We do eat syrian prepared chicken wings with potato slices from the oven, turkish bulgur with peynir cheese, paprika-tomatosauce and broad beans, selfmade hummus from Ali, kofte in tomatosauce with rice from Mohamed, spring rolls, salads with spinach, nuts and cheese, too much to mention. Yallah, on to the next Startblok iftar. 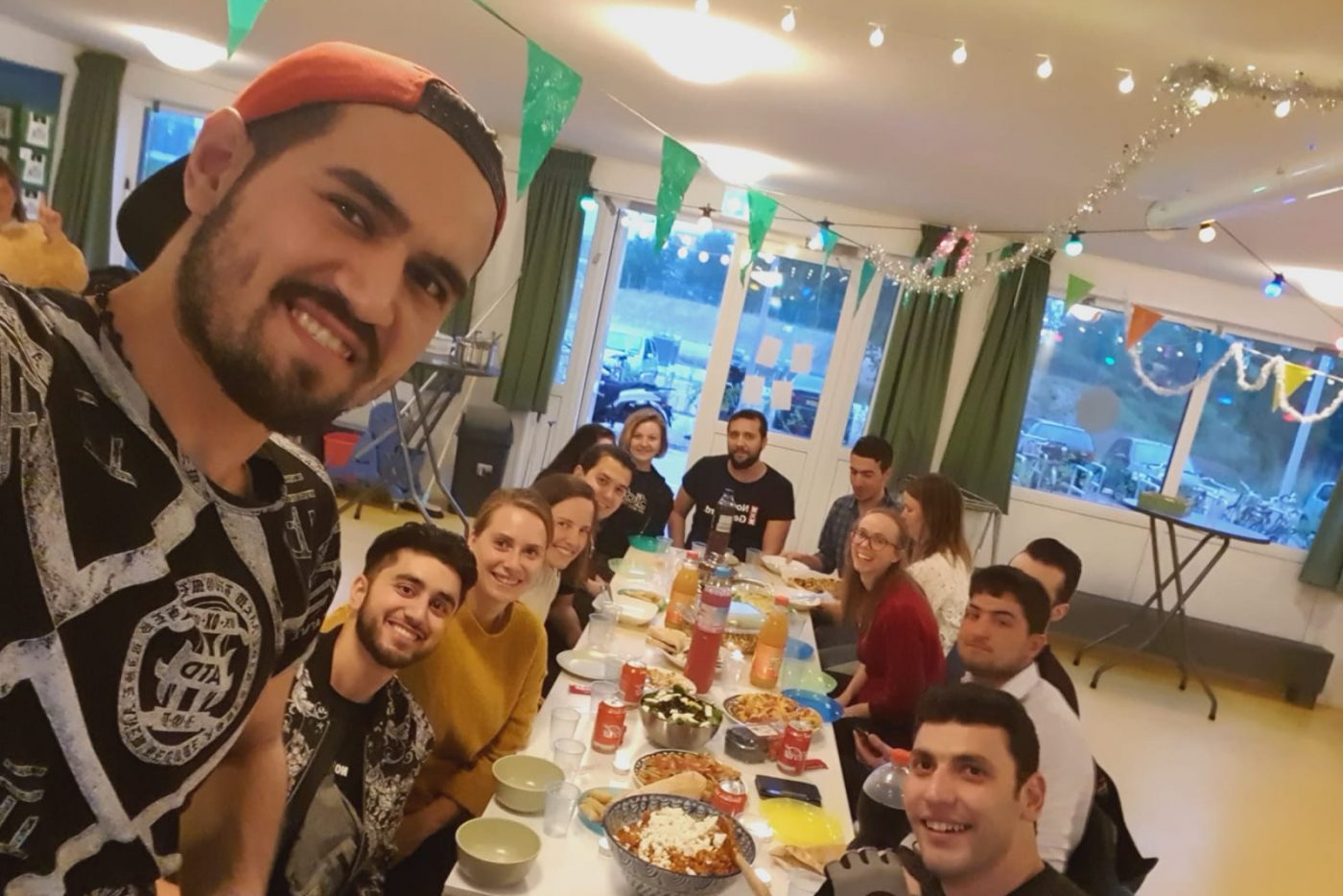 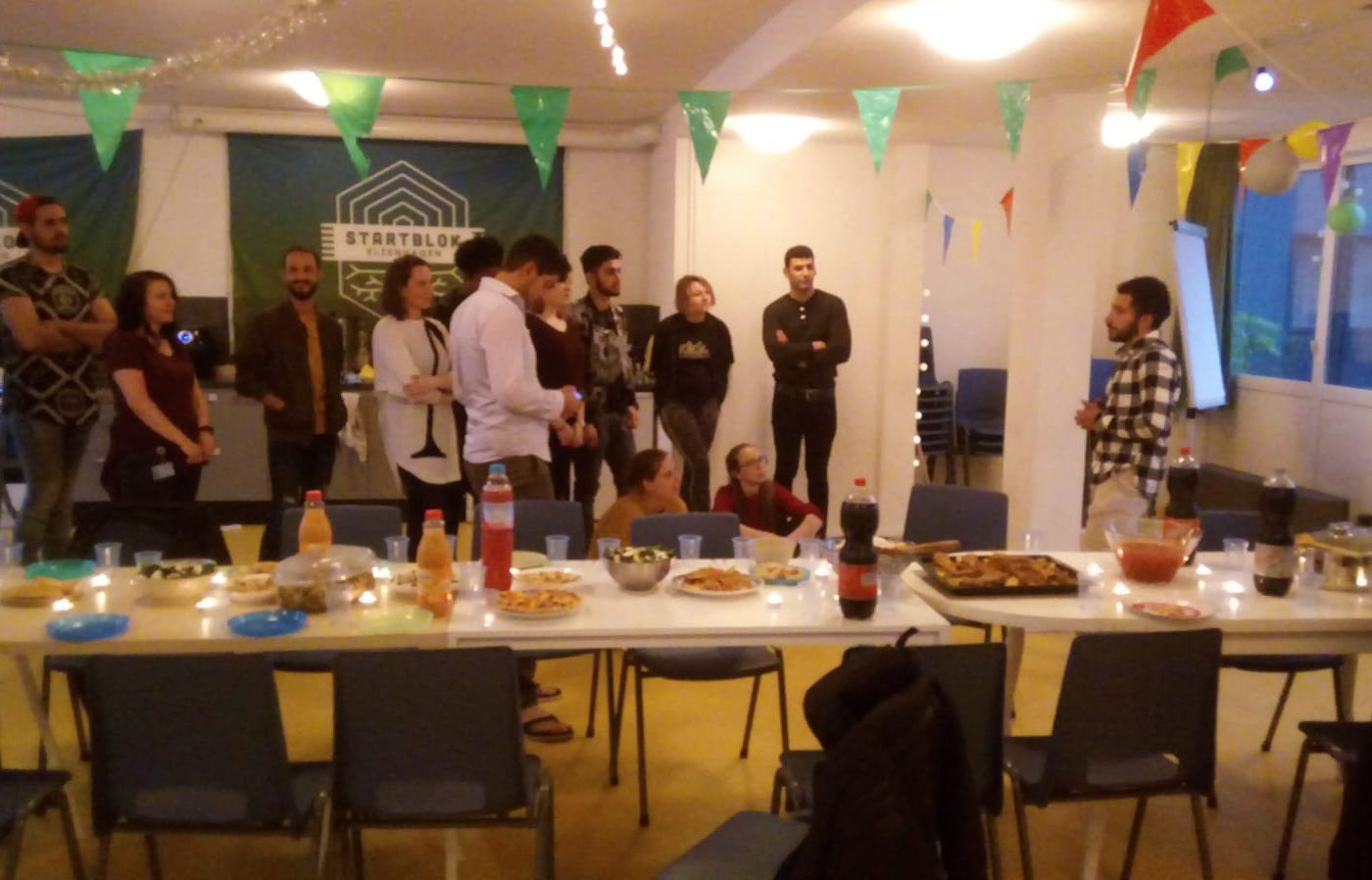 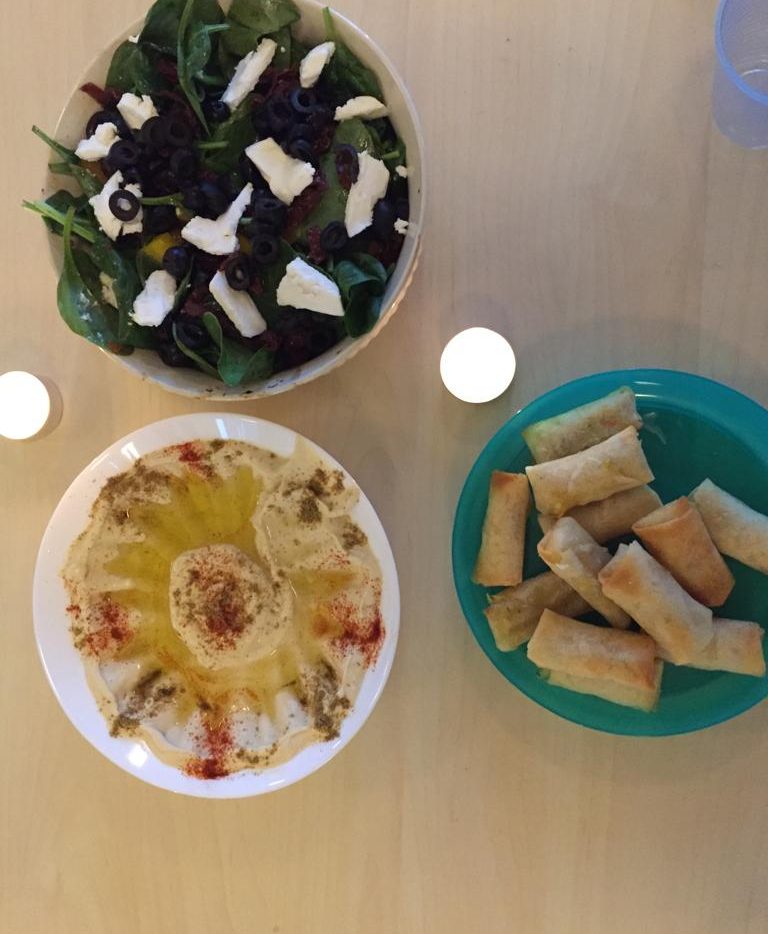